The Spring MET II 2018 has reached its third and final week of competition, and on Wednesday it was time for the 5, 6 and 7-year-old horses to shine in the Valencia ring as their finals presented by Kingsland got underway 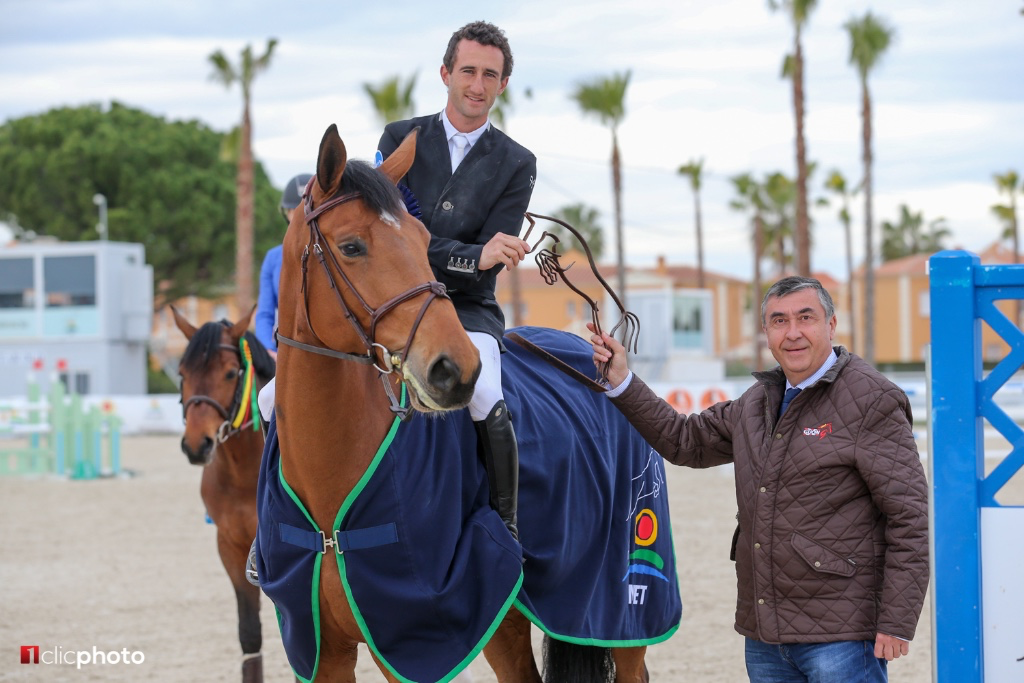 Among the 7-year-old horses it was the French combination of Burlington Riverland (Mylord Carthago x Dollar du Murier) and Maelle Martin that were the best.

Against a field of 53 other horse-and rider combinations, the pair had the fastest double clear round of the 1.40m class. In total, twelve of the seventeen pairs in the jump-off cleared the shortened track against the clock – but Martin’s 36.90 seconds was the fastest of the competition. The runner-up position went to Constant Van Paesschen (BEL) on Bugano de l’Abbaye (Ugano Sitte x Made In Semilly), 0.06 seconds behind the winning time. Giulia Martinengo Marquet (ITA) ended third on Clintana LVP Z (Clinton I x Quick Star). Marie Etter Pellegrin (SUI) was fourth with Baccarat du Tertre (Putch des Isles x Indoctro), while fifth place went to Harold Boisset (FRA) on Baya du Ter (Kannan x Poor Boy).

Maelle Martin has only been competing Burlington Riverland since the start of Spring MET II, but the two have already formed a partnership. “He’s a very easy horse, and eager to please,” Martin said about Burlington Riverland. “He’s always in a good mood, and super friendly.”

The win today was not expected however, and Martin – who rides for Ashford Farm in Belgium – was quite surprised. “I did my jump-off according to the plan I made with Enda (Carroll). I had the luck to be last to go in the jump-off, but Constant was really fast and I did not expect to be quicker than him really. But, my horse was really super today. I am very happy about the win, and of course grateful that Enda lets me ride such talented horses!”

Martin is happy to be competing under the Spanish sun where she will stay also for the third part of the Tour – the Spring MET III. “It is amazing here,” Martin said. “For the horses that lack a bit of experience, they learn more here in three weeks than during six months at home. To be able to jump in different rings, and also on grass, over different courses teaches them a lot in a short amount of time.”

“The organising team does a great job, every time I come back here it gets better. They are always looking to improve the facilities,” Martin concluded.

It was French on top for the 6-year-old horses as well, as Caracole de Talma (Quidam de Revel x Burggraaf) went off with the victory ridden by Harold Boisset.

Eighteen of the 56 in the class moved on to the jump-off after clear rounds over the 1.30m track, and twelve repeated their clean scores against the clock. Known for his speed, it came as no surprise that Boisset went off with the victory after another quick performance in 30.21 seconds. Diana Marsá-Lafarge (ESP) and Ciara (Cristallo I x breeding unknown) were not too far away though in 30.38 seconds, good enough for runner-up position. Alexander Housen (BEL) and Uricas V/D Kattevennen (Uriko x Cassini I) finished third with a time of 32.91 in the jump-off, while two Italians followed in fourth and fifth: Serena Curcio on Dinamit STB Z (Diamant de Semilly x Habsburg), and Alberto Zorzi on Adele Z (Air Jordan Z x Adagio IV).

For the 5-year-olds it was the Belgian combination of E-Risingson Z (Elvis Ter Putte x Concorde) and Loic Cannaert that were the fastest in the ten-horse jump-off over a 1.15m course. Stopping the clock at 33.97 seconds, the pair was almost two seconds ahead of Francesco Turturiello (ITA) on Ilexia van de Eijkhof (Kannan x Alexis Z) that took care of the runner-up position. Pato Muente (SLO) and Embassy PJ (Escudo 19 x Silvio I) finished third with a time of 36.32 seconds, while the two last double clears came from Great Britain: Benjamin Raistrick on Its Coming (Carambole x Karlstad) who finished fourth, and fifth placed Aled Harding on Icarus (Castell Caretino x Nintender).

Photo credit © Hervé Bonnaud / www.1clicphoto.com. These photos may be used only in relation to this press release and must include photo credit.

Like father, like son: Jérôme and Mathieu Guery end Spring MET IV 2022 with a Grand Prix win each