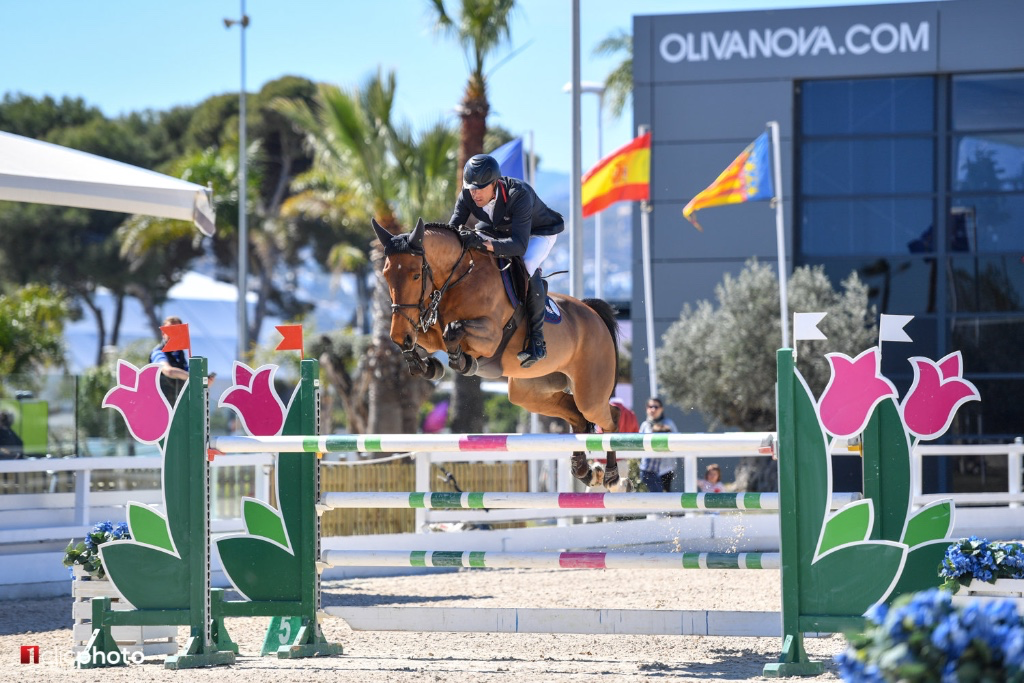 On Wednesday, the young horses took centre stage at the Spring MET III as the 5, 6 and 7-year-olds all jumped their finals for this part of the Tour.

For the 7-year-olds it was Mathijs van Asten (NED) and the KWPN mare Grietje vd Heezerenbosch (Arezzo VDL x Quick Star) that were the best of the 67 horse-and-rider combinations – going off with the victory in this 1.40m final presented by Kingsland. Thirteen pairs went clear in the first round, and in the jump-off seven of them repeated their clean sheets. Fastest of them all were Van Asten and Grietje vd Heezerenbosch.

“I was very happy with my horse today. We bought her as a four-year-old, and a Swedish girl called Sanna Olsson has been riding her for us and she did a very good job! I got the mare only a few days before I went here with her, and while we have been here in Oliva I have gotten to know her. Today she did a great job!” said Mathijs van Asten.

“My plan was to have a nice and tight round in the jump-off, and not go crazy fast. Then I got a very good turn from one to two and to the combination also, and she is naturally fast so I just kept on going on the last line – they also have to learn that,” smiled the winner. ”It was a nice course today in the 7-year-old final, a good size with a time-allowed that was a bit short which put some pressure on. Today’s track was a good test to see where you are after three weeks here in Oliva, and also towards the rest of the season.”

“This is a great place for the young horses, we come here every year. You can work your horses here in peace and quiet, you have a lot of space, sometimes you go on the grass, sometimes on the sand and they also have very good course designers which is important – so all in all it is super facilities. And the warm weather is of course a huge bonus!” van Asten added.

http://online.equipe.com/en/class_sections/289212
Best of the 5-year-olds was Caro Z (Clintissimo Z x Renkum Valentino) with Maisie Drea (GBR) in the saddle. Fastest of the five double clear pairs in the class, with a time of 39.24 seconds, the two took the top honours. Runner-up was Ester Blekkink (NED) on Itos S (Tangelo van de Zuuthoeve x Heartbreaker), over a second behind the winners in the jump-off. Third place in this final set at 1.20m went to Pato Muente (SLO) on Vilia von Lauzi (Cascadello I x Cormint), fourth to Katrin Eckermann (GER) on Sixtina 6 (Stakkato x Corrado I) and fifth to Tom Hollins (GBR) on My Lord George (Lord Luis x Graf Grannus).

The Spring MET III now enters its last weekend of competition, and concludes on Sunday with a CSI3* Grand Prix counting for the world ranking.  Click here for the results from the 5-year-old final.

Photo credit © Hervé Bonnaud / www.1clicphoto.com. These photos may be used only in relation to this press release and must include photo credit.