The Mediterranean Equestrian Tour kicked off its 2020 spring edition this week, with some of the world’s very best riders starting their outdoor season in Oliva Nova, Spain. In Saturday’s CSI2* 1.45 Grand Prix presented by CHG – Construcciones Hispano Germanas S.A – they had all lined up, and with names such as Scott Brash (GBR), Peder Fredricson (SWE), Edwina Tops-Alexander (AUS), Alberto Zorzi (ITA), Pedro Veniss (BRA) as well as Nicola and Olivier Philippaerts (BEL) on the start list the class was bound to become a battle between stars.

No less than 21 horse-and-rider combinations out of the 53 in the Grand Prix managed to solve all the questions asked by course designer Franz Madl, producing clear rounds over the thirteen-fence track in round one. “The level here is very high,” Epaillard commented after the Grand Prix. “For Spring MET I we have a lot of top-level horses and riders who are all starting the season here. With this in mind, I think it’s quite natural to have a lot of clears. I also think that at the start of the season, it’s important to not make it too difficult for the horses. They have a long season ahead of them, so the course designer did a good job today.” 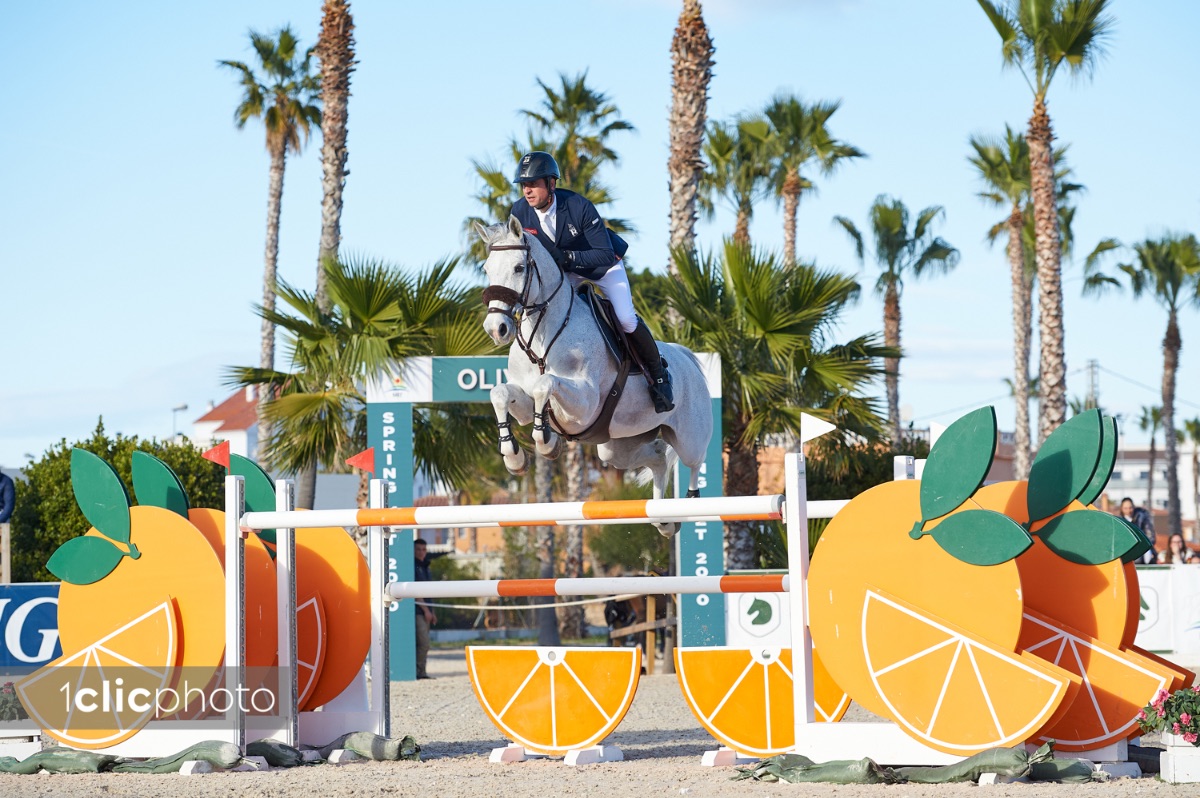 Epaillard was second-last to go in the jump-off, and as he went in the ring with his 11-year-old grey mare Jalanta P (Catalano x Fortinbras) it was Laura Renwick (GBR) that was in the lead. Half-way into the jump-off, Renwick blazed around the shortened track with Dublin V (Vigaro x Calvados / Sable Rose) to set the time to beat at 44.54 seconds – and for a long time it looked as if no one would catch her. However, when Epaillard is coming behind no one is safe and today was no exception. At the speed of light, Epaillard raced around the jump-off track – going full speed on the last stretch past The Club. When he crossed the finish line, the clocks stopped at the incredible time of 43.03 seconds. “I was at the end, and had seen Laura’s round so I tried. It was win or lose, no tactics,” Epaillard smiled after snatching the win from Renwick. Alberto Zorzi (ITA) and Vauban du Trio (Nervoso x Desir du Chateau) followed in third with a time of 46.21 seconds, Eduardo Alvarez Aznar and Legend (Ogano Sitte x Nabab de Reve) in fourth with a time of 46.48 while fifth place went to Nicola Philippaerts (BEL) and Katanga vd Dingeshof (Cardento 933 x Tornedo Fcs) in 46.71.

“I’m very happy with Jalanta. I have been riding her since October last year. She is a really nice mare, actually I think she is a super star. Now I start to jump a bit bigger with her. She is super careful, competitive, fast and scopey. I think she has a great future ahead of her,” Epaillard said.

Epaillard is a frequent visitor in Oliva, and comes back season after season. “I really like it here, I come here a lot,” he said. “Everything here is made for horses and riders, and the ground is super. The organisation is always nice, everything is clean and it’s always a pleasure to come here!”